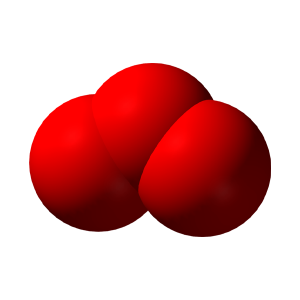 Ozone : Description and use

Ozone is a normal component in the atmosphere. Its concentration varies with altitude, latitude, temperature, solar radiation and air pollution. It is continuously being formed in the upper atmosphere due to the
photochemical effect of ultraviolet rays at wavelengths of under 250nm on the oxygen in the air. In the stratosphere, at an altitude of 15 to 50km, the concentration of ozone is approximately 1 to 10ppm and makes up what we call the ozone layer; the Earth's shield against ultraviolet rays. The usual concentration in the environment at ground level varies between 0.005 and 0.05ppm. As an air pollutant, ozone is identified both as a greenhouse gas (contributing around 8%) and one of the gases comprising smog. It is linked with the formation and decomposition of nitrogen oxides, which are a product of using fossil fuels.
At ambient temperature, it is a pale blue gas, or even colourless, which is characterised by its odour.

Flammability: Ozone is a non-flammable gas. However, it is a powerful oxidising agent which could start a fire.
Explosiveness: The decomposition of ozone can be explosive: ozone in liquid or solid state and the gaseous mixtures of concentrated ozone in oxygen (over 9.2% vol/vol) can explode further to an impact or if they are exposed to heat, a spark, sudden temperature or pressure changes or in the presence of impurities. Its reaction with certain compounds, including flammable materials, combustibles and oxidisable materials, can be violent and can cause an explosion.

Ozone is mainly used in water treatment to:

In various industrial processes, it is mainly used for its oxidising properties:

H270 - May cause or intensify fire; oxidiser.
H330 - Fatal if inhaled.
H341 - Suspected of causing genetic defects.
H370 - Causes serious damage to organs.
H335 - May cause respiratory irritation.
H372 - Causes damage to organs through prolonged or repeated exposure; Can explode further to a shock and/or friction.

Equipment available for rent
within 24/48 hours

This equipment protects human life, which is why we made the decision to offer solutions tailored to your needs when you request a quote, rather than simply providing an online store.
Once your request has been confirmed, our staff will get in touch with you quickly to provide you with expert advice and suggest the best configuration for your safety needs.