Every year, huge amounts of green algae wash up along our coastlines, made worse by intensive farming practices. When at sea or if they have only recently been deposited on the beach, green algae pose no health risk. There is nothing intrinsically toxic about algae. However, when they start to decompose in the sun, they release gases that are dangerous for people and animals. 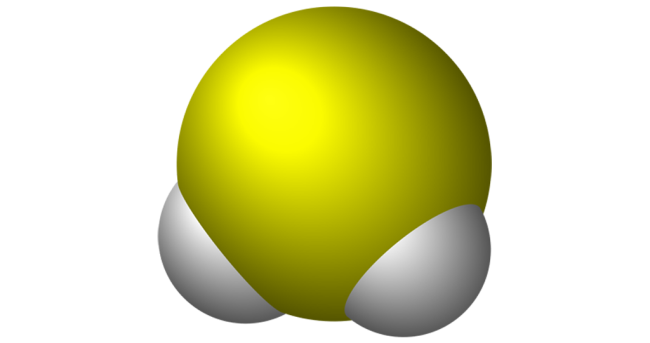 Hydrogen sulphide is a chemical compound with the formula H₂S, made up of sulphur and hydrogen. It is a flammable, colourless and very toxic gas. In low concentration, it has the odour of rotten eggs and in high concentration it is odourless. It is slightly soluble in water, and its liquid phase is more commonly known as hydrosulphuric acid (a weak acid).  It reacts with basic aqueous solutions and metals such as silver and steel, even stainless steel.

Hydrogen sulphide plays an important role in biology. It is produced by the breakdown of proteins containing sulphur and is largely responsible for the characteristic odour of flatulence and excrement, in both humans and animals. It can be derived from the bacterial breakdown of organic matter in oxygen-depleted environments (methanisation).

Hydrogen sulphide can also be produced by a range of industrial activities and is found naturally in oil, natural gas, volcanic gas and heat sources as well as green algae.

To find out more about hydrogen sulphide, please read through our gas guide: click here 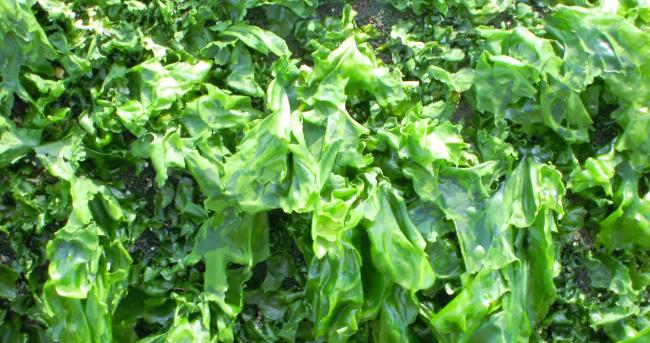 Green tide is the name given to the mass of green seaweed covering certain beaches. The seaweed in question is of the Ulva genus, and is better known as “sea lettuce”.

In Brittany, the green tide phenomenon happens every year, with beaches becoming infested with Ulva armoricana, on top of the Ulva rotundata that affects southern Brittany in the spring. The natural conditions are favourable to the proliferation of algae during that season (enough light, good sea temperature, a geographical landscape that lends itself to the build-up of algae). However, the main cause of the green tide phenomenon is the abundance of nitrates carried along by rivers flowing to the ocean. These nitrates, which are mainly produced by farming activities, feed the algae and encourage their spread in certain seasons.

Green tides smell particularly bad, but above all, they produce harmful effects on the environment and health.

The decomposing algae produce a bad smell, release greenhouse gas (methane), and have extremely negative consequences for the local area:

How does H₂S form in green tides? 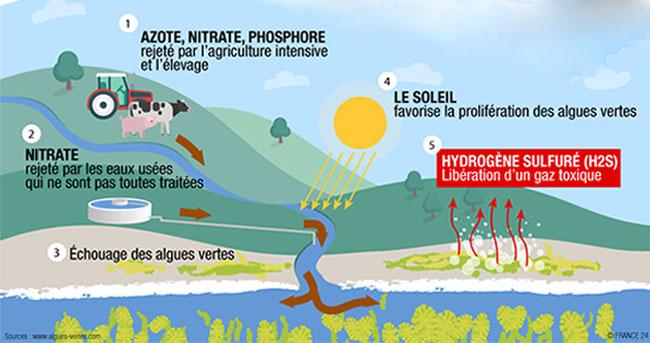 When they decompose, algae release gases that vary in type depending on whether oxygen is present:

Among the spectrum of gases released, it is generally agreed that only H₂S poses a high risk of toxicity.

The algae that wash up on our coasts only start to decompose after around 2 or 3 days, which is when the H₂S begins to form. Algae deposited further up the beach are more likely to decompose, because they dry out more quickly and a crust forms on the surface, speeding up the spread of H₂S.

The effects of hydrogen sulphide on humans 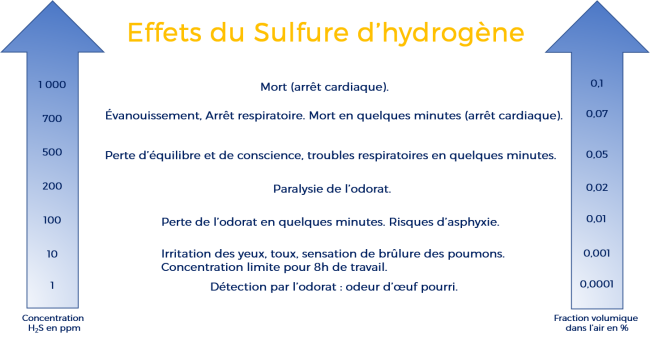 The effects of hydrogen sulphide on humans

Overexposure leads to various complaints depending on the degree of exposure, with signs ranging from irritations affecting the eyes and respiratory mucosa to, in extreme cases, pulmonary oedema (sometimes delayed) and neurological problems (headaches, coma, convulsions) as well as a disturbed heart rate.

Even if they do not lead to death, these effects can have long-term neurological consequences.

How can we protect ourselves from H₂S?

Don’t rely on the smell, because the gas is known to cause a loss of smell very quickly (from 100ppm). If possible, keep the concentration values down to well below the permitted exposure limit, to guarantee a healthy environment and safeguard the well-being of staff.

Equipment available for rent
within 24/48 hours

This equipment protects human life, which is why we made the decision to offer solutions tailored to your needs when you request a quote, rather than simply providing an online store.
Once your request has been confirmed, our staff will get in touch with you quickly to provide you with expert advice and suggest the best configuration for your safety needs.